Regions Of Carpets And Kilims

Hereke rugs are named after the town they are made in. They are made of wool and silk with an average of 100 knots up to 400 knots in every centimeter square. They are very fine and valuable weavings. 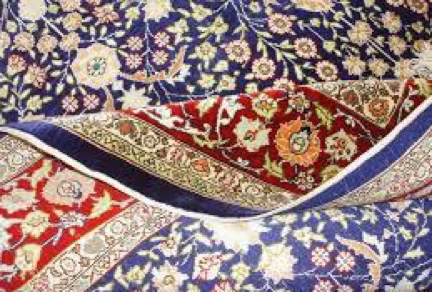 Hereke rugs are known as the highest quality rugs in the world. It takes months to weave some of the carpets, they are fully handmade. They are one of the best known kind of Turkish rugs. A number of reasons contributed this area to become a center in rug production. Bursa region (which is close to Hereke) is a silk production center, Hereke is on the historical Silk Road, and it is close to Istanbul; thus the Ottoman Palace. The production in Hereke started at Hereke Fabrika-i Humayunu (Hereke Emperor’s Factory) with the initiative of Sultan Abdulmecid in 1843 to produce curtains, upholstery fabric and rugs. Although rug production did not start until 1891. Within years the quality of rugs produced here improved with number of of knots in every centimeter square increasing and motifs becoming more elegant. The rugs made in early years have a more raw look due to lower number of knots. 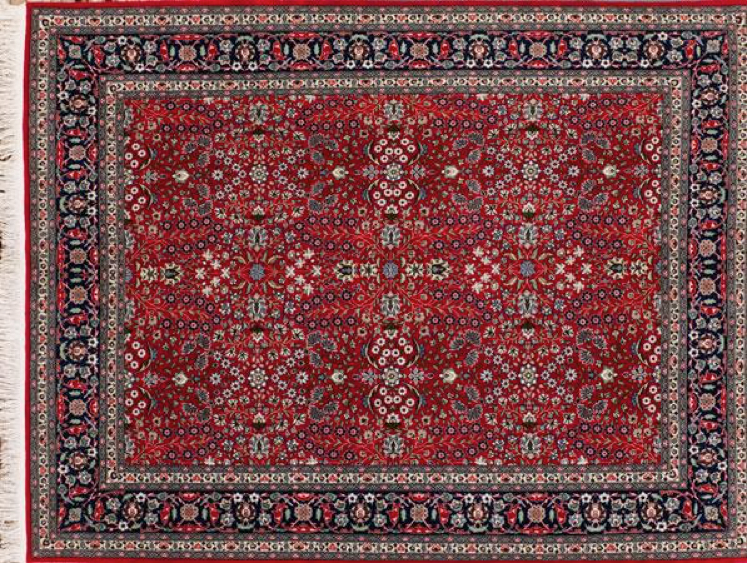 During the first years of production the design consisted of floral motifs without any animal figures. The rugs with altar motifs we named as ‘Topkapi Prayer Rugs’. In the years that followed the quality of rugs improved by higher knot density. With Ottoman dynasty becoming more westernised and the Turkish nomadic culture slowly becoming a thing of the past, Hereke designs were on high demand. When the dynasty moved from Topkapi to Dolmabahce Palace, only Hereke rugs were moved to the new palace. To increase the durability of the thin rug, warp is made of cotton threads on Hereke rugs. Designers have developed a unique production procedure in the designing of Hereke rugs. It is known that Yildiz Palace painter Monsieur Emin Meinz who was appointed to work at Hereke Factory some days of the week designed the rugs and fabrics. Starting from 1892 machine made carpets were produced at Hereke Factory as well.

As production and number of looms increased, artisans were brought from Gordes, Demirci and Sivas to compensate the increasing production. These artisans taught their trade to locals of Hereke region and rug making spread to surrounding areas. Palace rugs and rugs to be given as presents to foreign government officials were produced here. Especially after 1943 Hereke became an important center in rug production. While Gordes and Demirci style rugs were made initially, in the following years finer rugs were produced by imitating styles of Usak, Bergama and Palace rugs. Beige, pink, blue, light green and dark blue colors were used as base color on Hereke rugs. Yellow, black, brown, bordeaux were used in motifs and counters surrounding motifs. When the base color is red, borders are dark blue and when the base color is dark blue, borders are red. On Hereke rugs that were made of pure silk or silk on cotton, silk from Bursa was used. On wool Hereke rugs motif knots are high quality wool on cotton warp and weft. Hereke rugs are only knotted with double knots also known as the Turkish knot. With one million Turkish knots in a metre square the production of Hereke rugs take up to 10 months with unique and complicated methods.

The common trade of 350 tribes that live from the west of Caspian Sea to Black Sea including a territory in Iran is carpet weaving. This ethnographically rich and geographically vast land comprises of 3 territories:

The main weaving regions in Caucasia are:

In the 17th and 18th centuries small rugs were made in the north of Iran and east of Turkey. From East Anatolia to the Caspian Sea nearly each village weave their unique rugs. Although Caucasian rugs were under Iranian influence at first, after interpretation of local elements, a genuine Caucasian style was born. The motifs used on these rugs are commonly geometric shapes, four legged animal figures and dragon figures.

The word ‘Dagestan’ means ‘land of mountains’. It is the name of the mountainous region in the Northeast Caucasus. 19th century rugs that were produced in this region are small. Commonly we find a ‘cage’ design or the 8 pointed star which is called a Lesgi Star on the rug. Rugs from these region are double knotted on wool warp. The weft is wool and cotton. Dagestan is famous with its unique kilims with lively colors.

The first historians that mentioned kilims were the ones that lived in 1000’s. Dagestan’s high quality, exquisite and sturdy rugs have become a valuable commodity within time. This craft is an outcome of mountain peoples’ lifestyle. Wool came from abundant wool flocks, minerals in various rocks and the rich vegetation have provided natural dyes and the culture, history of these people provided the motifs, symbols that make these items unique. The most renowned regions with their rugs are:

These rugs come from a region with no virtual borders. The region is in the south of Caucasia and Kura river, including Tiflis and Erivan and north of Aras river. Carpet making is very important in general in the Turkic world and specifically Kazakhistan. In Kazakhistan, in regions especially close to Ozbekhistan there is a rich weaving tradition. Most importantly Turkhistan and Cimkent, Kizilarda are important weaving centers. We know that various weavings were produced in this region arerugs, kilims, soumakhs and jijims. These handwoven home goods are still part of everyday life.

Turkhistan and Kizilarda regions fell under Russian rule in 1853 after a 23 day battle. The traditional production methods and procedures of handmade weaves (rug, kilim, jijim and sumakh weavings) were interfered and the state started to control the procedures. Production moved to workshops from homes, hindering methods developed over generations, and consequently leading to declining quality. The new procedures became widespread with government support. As a result the carpet weaving tradition which finds its roots in Central Asian Turkish Culture was uprooted. The structure of looms were changed, the knots used to tie warp threads were changed, instead of two weft lines one weft line started to be woven in between knots, the fully wool content of rugs was changed to cotton and even synthetic yarn. Natural dyes were replaced with chemical dyes. Kazak motifs and symbols were deliberately changed. Despite all this, Kazaks living nomadic lives managed to preserve their motifs and symbols. Official interference from the government did not change the motifs and symbols vastly.

Persian rugs are high quality rugs that are knotted with the Turkish or Persian knot and dyed with natural dyes. The first countries that come to mind when talking about rugs are Turkey and Iran. Carpets being accepted as one of the most important handcraft, came out of communities that lived in these regions. They invented the techniques to bring these works of art to life, weaving with ingenuity and capturing impeccable colors of the nature.

Iran is advanced in terms of handcraft. Today carpet weaving is the most widespread handcraft in Iran. Iran rugs are famous with their rich weaving tradition, exquisite motifs and sturdy design.

Especially rug weaving is advanced in Iran compared to pottery and jewellery making. Persian rugs that became widespread starting from the 16th century are famous all over the world. On pile rugs and woven kilims we find traditional motifs and symbols. The name given persian rugs is ‘Acem Rugs’. In a way these are still Turkish rugs made by Turkic communities in Iran such as Azeri, Turkoman and Qashqai.

Knots used on Persian Rugs are different than Turkish Rugs. The so called Acem Knot or Persian Knot is a more loose knot that is also weaker in terms of quality and sturdiness.

Keshan is in Central Iran. Keshan Rugs are among Iran’s most valuable rugs. They are very fine weaves; soft and bright just like velvet. There are 10 - 14 knots in every centimeter square and they are usually in darker tones. The most important characteristic of these rugs is their material, silk. The knots are also silk threads. On some rugs silk is interwoven with gold and silver while preparing the threads for knots. Gold and silver are more common in Isfahan Rugs. The common design in Keshan Rugs is the medallion design. As in Tabriz rugs, the medallion is made to indicate the center of the rug. We understand from historical evidence that this medallion design originated in Keshan and later on carried on in Tabriz. Although they are small, these rugs are elegant and detailed. There are hunting scenes on these rugs as well as motifs of animals fighting each other, deer, wild boar, goat and several other animal figures. Even though the borders on Keshan Rugs resemble Tabriz Rugs’ borders, in the middle and on the sides three border system is used.

Iranian Shah, Abbasi commissioned some rugs in the 17th century in Isfahan. The workshops Shah Abbas I. established contributed to the rugs that were woven on Shah Abbasi’s command. These workshops did not last long, they were dismissed after Shah Abbas died. For a long time these rugs were named as ‘Polish Rugs’ in rug literature, but after historical data came to surface the name was corrected and changed to ‘Shah Abbas Period Isfahan Rugs’. Since these rugs were commissioned by European families, we often find European families’ or various European countries’ crests on them. With their characteristic motif and composition, Isfahan Rugs are eclectic rugs. These rugs carry colors and motifs of different regions since they were made in various workshops in different regions, hence it is difficult to specify their exact origins. They resemble Keshan rugs since they comprise of wool and silk. In some cases they are woven with silk and gold; their colors are diverse. Unlike other Persian rugs that use two colors in dark and light tones, Isfahan rugs use a rich color palette with many tones of each color used. Medallion structure is also different on Isfahan rugs. Aside from the center medallion, there are other medallions that intertwine or align on a row surrounding the center medallion. This design creates a crowded look on the base with several branch embellishments.

The unique designs of Isfahan rugs captivated European buyers and they commissioned these rugs in large quantities. Due to the commissioned nature of these rugs, there is a European feel to their design. In the museums of the east and in Poland a large number of Abbas I. period rugs can be seen. Since these rugs were exported to Europe in such large quantities, they can also be seen in museums in Europe. The knots were tied in a way to form a raised texture. Isfahan rugs are commonly in pastel colors and do not contain figures.

Kirman is a rug center in the south east of Iran. Lamb wool is used in kilims made here; they are sturdy, high piled, soft and firm weaves. Motifs are very complex and they are genuine Iranian designs. The techniques used in the making of these rugs, motifs, colors and compositions vary. The ones knotted using the Persian knot are woven with wool, silk, gold and silver yarn in some places. The borders are narrow; the frame rugs commonly use as the border is combined with the base. Hence, when two rugs are laid the motif seems to continue passing from one kilim to the other. The main composition comprises of diamond-shaped motifs on Kirman Kilims. Unlike Tabriz, Keshan and Isfahan rugs Kirman rugs do not contain medallions. Diamond-shaped motifs repeat themselves until the border.

Palm-leaf motifs are aligned to form diamond-shaped figures. Each palmette-motif forms two diamond shapes. On this design we find three diamonds intersecting originated from convoluted diamonds and thin, long leaves. Another design is called ‘Vase design’. The motifs seen on these rugs are vase motifs, palm-leaf motifs and lily motifs. The so called Vase Rugs are dated to the second half of 16th century.